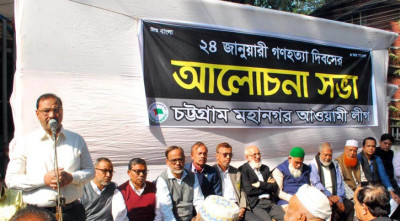 PV Online Report : City Awami League General Secretary AJM Nasir Uddin said that Mirza Rakibul Huda was a retired military officer. Dictator Zia appointed Rakibul Huda as Commissioner of CMP. Hence the creation of murderer Rakibul Huda Major Zia and he sowed the seeds of military dictatorship in this country. He said this at a discussion meeting on Genocide Day in the square in front of the old Bangladesh Bank on the initiative of Chittagong City Awami League on Tuesday (January 24) morning.
He said, 35 years ago on this day, the Chittagong massacre took place in a very planned manner. On that day, 24 Awami League leaders and activists were killed by indiscriminate firing on the orders of the then commissioner of CMP Mirza Rakibul Huda under the direct instigation of the then dictator Ershad in an attempt to kill Sheikh Hasina and on that day the farewell bell of the military dictatorship rang from Chittagong. Despite the fall of the dictatorship in 1990 due to the continuation of the anti-dictatorship movement, their descendants are still spreading multifaceted conspiracies.
He said that militancy has arisen in this country during the BNP Jamaat coalition government led by Begum Zia. Sheikh Hasina and Awami League leaders have been repeatedly attacked to wipe out Awami League. Hundreds of activists including ASM Kibria, Ahsan Ullah Master, IV Rahman were killed.
There was no trial for these. Although tried, the punishment was not executed. Khaleda Zia is a convicted accused in the corruption case and her son Tariq Rahman is an absconding accused sentenced to life imprisonment. That Tariq Rahman is sitting in London and shaking a stick in the movement to overthrow the government.
Nagar Awami League Legal Affairs Secretary Advocate Sheikh Iftekhar Saimul Chowdhury spoke in it, Bangladesh Awami League National Council Member Naeem Uddin Chowdhury, Nagar Awami League Vice President, Advocate Ibrahim Hossain Chowdhury Babul, M Zahirul Alam Dubash, Adviser Safar Ali, Sheikh Mahmud Ichhaq, Secretary Mandalir. Members Noman Al Mahmud, Shafiq Adnan, Shafiqul Islam Farooq, Chandan Dhar, Mashiur Rahman Chowdhury, Haji Mohammad Hossain, Zahoor Ahmad, Zobaira Nargis Khan among others were present on the occasion.
Edited By-SPT 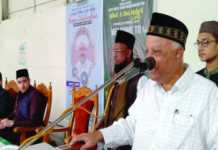 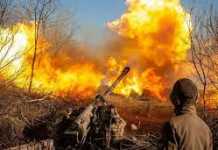 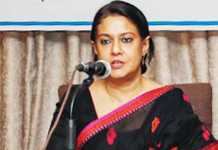